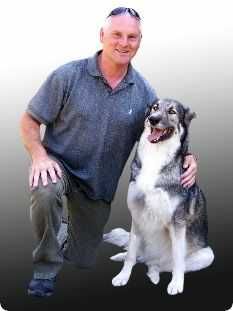 Chaz, the founder and chief instructor of Man's Best Friend, has been a professional dog trainer and teacher for over two decades.

He joined the RAF in 1975, for the express purpose of being able to work with the Royal Air Force police dogs. From the outset he displayed a flair, and an innate natural ability for the work he had chosen. This ability was immediately recognised by his instructors, and it was not long before he found himself employed at the Royal Air Force dog training school, at RAF Newton. As Chaz comments himself, he was so fortunate to be at the dog school at such an early stage in his career. The availability of practical hands on training experience was absolutely unprecedented, when coupled with the fact that he found himself working with, and under the guidance of RAF and civilian instructors. In fact the civilian instructors where the cream of the crop of ex RAF training instructors, and each had been employed by the MOD for the express purpose of continuity at the training school. Each one of these instructors had at least 25 to 30 years experience! Each not only in dog training, but also in the teaching of people. The knowledge on dog training and canine behaviour was at cutting edge, and as Chaz states, he is so grateful to have been part of this at such a formative time in his career.

During his time in the RAF, Chaz became a qualified instructor, training and handling dogs across the whole gambit of training activities including, obedience, police work, agility, fire arms, explosives and drug detection work, and many other aspects of training, including remedial work and behaviour modification. His work also included the teaching of others in these skills. 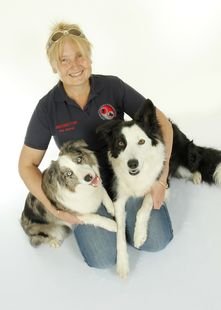 Kim, who is the rescue, training and re-homing co-ordinator for the rescue dogs at Man's Best Friend, has been working with dogs since she joined the RAF, in June 1977. Kim had always wanted to work with dogs, and found that the ideal job for her was with the Royal Air Force Police Dog Training School, based at RAF Newton, Nottingham which was where Kim & Chaz met.

Whilst at RAF Newton, Kim had experienced the practical and academic side of kennel management, nutrition, animal welfare, dog handling, training, behaviour and the veterinary aspect of all the dogs in her care.

During her time in the RAF, Kim handled a vast amount of dogs, and a variety of different breeds, she attended many classes on dog behaviour and psychology.